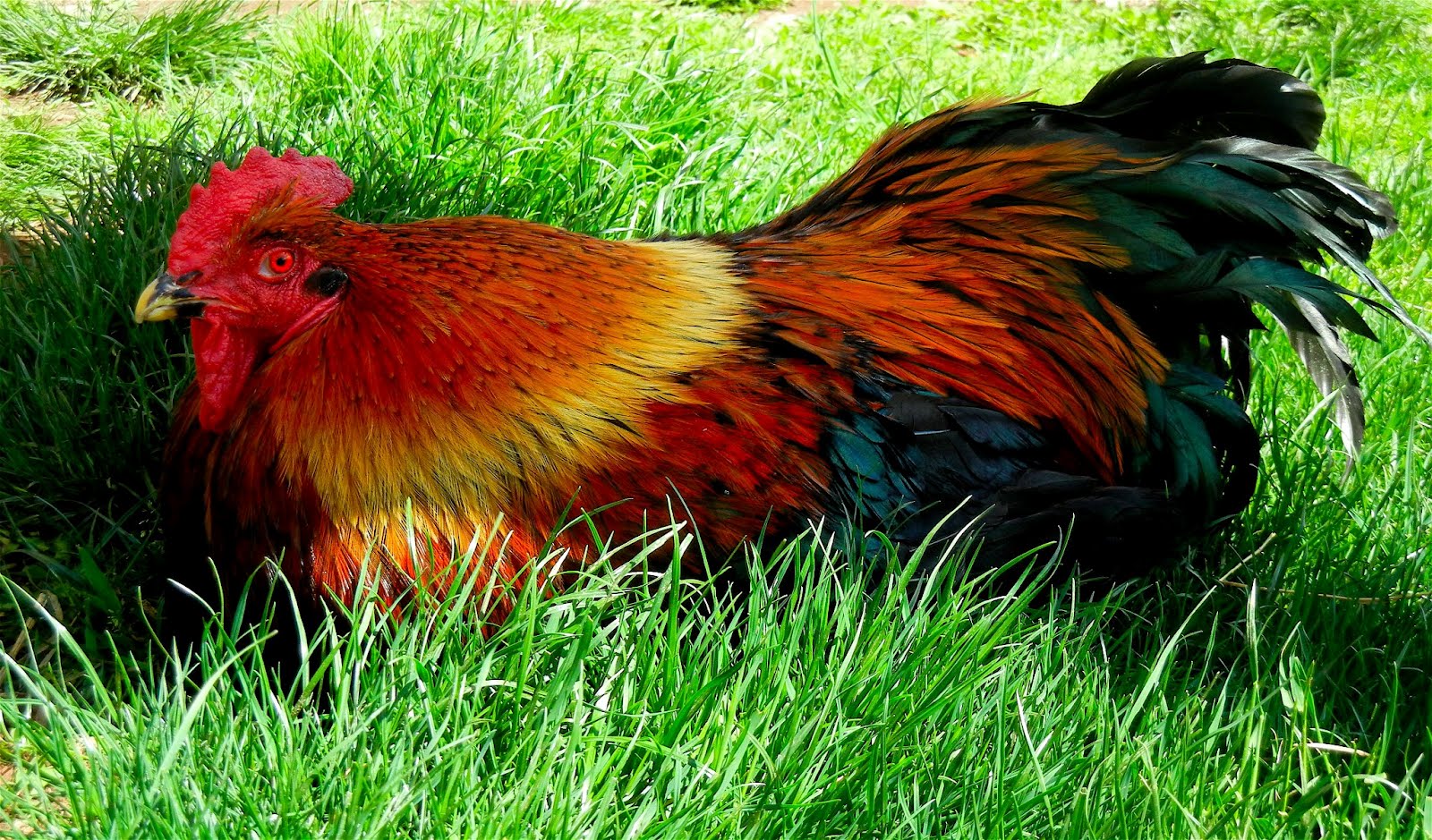 Modern domestic chickens originated in the foothills of the Himalayan mountains and in the tropical forests of Southeast Asia, where their wild counterparts, the Red Junglefowl, continue to roam and live with their families as they have done for thousands of years. (1) Chickens are communal and highly sociable creatures, able to interact well with other species and to enjoy bonds of interspecies affection. (2) They form deep friendships with other chickens and will mourn for days or weeks when they lose a cherished companion.  (3) Studies and anecdotes continually affirm that chickens are empathic, affectionate animals.  People who have rescued chickens and shown them kindness will often describe birds that are much like cats in their desire to occupy a human lap; chickens even make a noise when contented that is commonly referred to as purring.

Chickens are also highly intelligent.  They recognize faces and can distinguish over one hundred different individuals (4); they see more colors than humans can see, and form and remember meaningful color associations, as well as patterns and symbols.  Chickens have a language with over 30 separate alarm cries; different calls or “words” to alert others to what type of food they have found for sharing; sorrowful sounds made only when they are grieving or dejected; and songs of celebration.  Among their many joys, chickens love to sunbathe, and are known to follow the sun around a yard. They lie on one side and stretch out a wing, then turn over and spread the other wing, all while raising high their neck feathers to allow for maximum absorption of warmth and vitamin D. 5 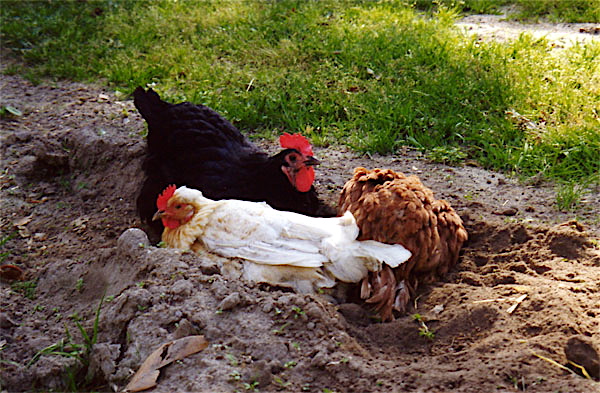 There is perhaps no surer testament to a chicken’s capacity for joy than a dustbathing display.  Dr. Karen Davis has rescued hundreds of abused industrial chickens, and describes their delight in this important ritual: “For chickens, dustbathing is not only a cleansing activity; it is also a social gathering. Typically, one hen begins the process and is quickly joined by other hens and maybe one or two roosters. Soon the birds are buried so deep in their dustbowls that only the moving tail of a rooster or an outspread wing can be seen a few feet away. They paddle and fling the dirt with their claws, rake in particles of earth with their beaks, fluff up their feathers, roll on their sides, pause from time to time with their eyes closed, and stretch out their legs in obvious relish at being able to bask luxuriously and satisfy their urge to clean themselves.”

In the wild, chickens can live anywhere from 7 to 15 years, but on commercial farms that supply over 95% of the chickens killed for meat in this country, the birds are still babies when they are slaughtered at a mere 45 days old. (6)  Every year in the U.S. alone, 9 billion “broiler” chickens, both males and females, are raised and killed for food. (7)  That’s 24 million killed every day, 17,000 each minute, or 285 chickens killed every second–just in the U.S.  Worldwide, over 50 billion chickens are now being slaughtered every year. Commercial producers raise chickens exclusively indoors, confined in large, warehouse-like buildings; each building may house up to 40,000 birds, and between 150,000-300,000 birds may be raised on one site. (8) 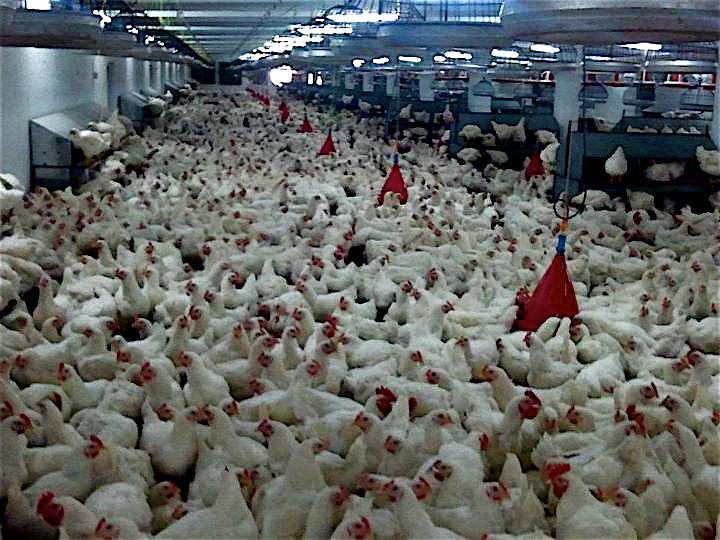 Producers are permitted to crowd broiler chickens at such high concentrations, that the average amount of space per bird is only slightly larger than a single sheet of letter-sized paper; it is often much less.  Crowding at this level causes poor walking ability; thigh sores and scabs; scratches from birds walking over one another; lesions and rashes on the back of the legs and feet, which sometimes progress into deep ulcers; deteriorated air quality and higher rates of respiratory illness; heightened nervousness and fearfulness; and expression of neurotic coping behaviors from severe stress and frustration. (9) Overcrowding is only one of the major welfare problems for these birds.

Broiler chickens have been genetically manipulated for faster growth to slaughter weight.  In 1925, it took 16 weeks for a broiler chicken to reach 2.5 pounds.  But in 2011, it took just 6 and ½ weeks for a broiler chicken to reach 5.8 pounds. (10)  Such unnaturally rapid growth causes painful debility, deformity, and death in billions of U.S. chickens every year.  As a result of selective breeding for overgrown muscle tissue (meat) of the breast and thighs, muscle growth in broiler chickens far outpaces bone growth, resulting in high rates of skeletal disorders, especially leg deformity and lameness.  Studies consistently show that roughly 30% of the U.S. broiler population, or nearly 2.7 billion chickens, suffer from painful lameness or impaired mobility.  Severe leg deformities prevent chickens from reaching food or water, and they are often trampled by other birds.  In the U.S. each year, approximately 90 million broiler chickens die or are destroyed due to leg problems alone. (11) 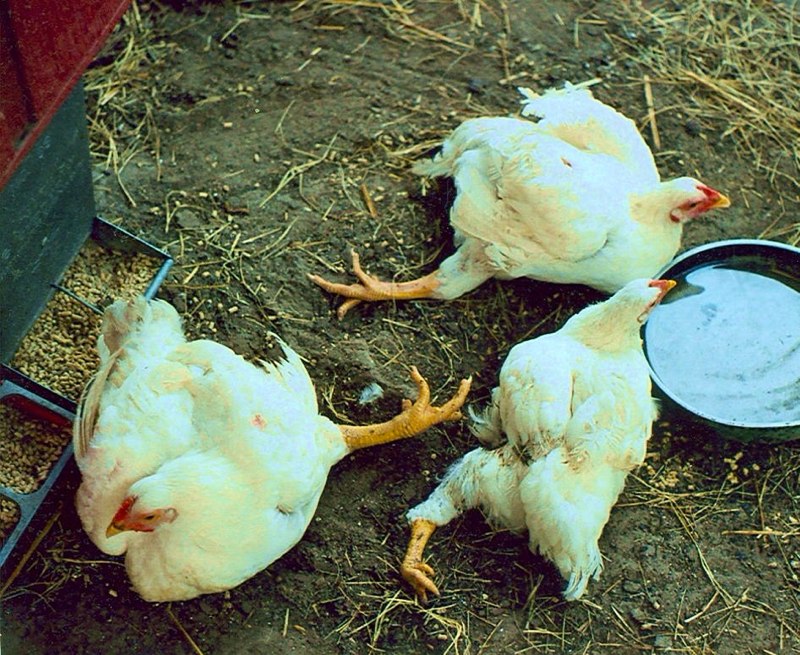 These rescued “broiler” chickens had leg deformities so severe they could not even walk.  They died within two weeks of their rescue at Chocowinity Chicken Sanctuary.  (photo by Kay Evans)

Between 5-7 weeks of age, broiler chickens spend 76-86% of their time lying down as a result of lameness and deformity. (12)  Hypergrowth of muscle tissue not only outpaces bone growth, it also outpaces organ development, which means the heart and lungs frequently cannot produce oxygen at a rate sufficient to sustain disproportionate body mass. The number one cause of non-slaughter death in broiler chickens is ascites, a condition in which insufficient oxygen production leads to liver or heart failure. (13) A related condition that kills millions of U.S. broiler chickens each year is SDS or Sudden Death Syndrome, in which death from acute heart failure is preceded by sudden convulsions and frantic wing-beating.  An estimated 1-4% of U.S. broilers die from rapid growth-related SDS. (14)

Commercial broiler chickens are usually raised in continuous or near continuous artificial lighting, receiving at most 4 hours of darkness, usually in increments of only 1 or 2 hours at a time.  Near constant light deprives them of sleep, and encourages them to eat continuously, exacerbating the rapid growth in body mass that their outpaced skeletons and organs cannot sustain.  Insufficient rest also contributes to higher stress and nervousness, which puts more pressure on already overtaxed hearts and lungs.  Although the lighting in broiler chicken sheds is almost constant, the light itself is extremely dim as higher light intensities stimulate activity. Light is therefore kept at a level too bright to be conducive to sleep but too dim to encourage exercise, which would burn calories and cause chickens to take longer to reach slaughter weight. (15)

In the brutally unnatural surroundings of a factory farm, “broiler” chickens live the entire 45 days of their lives on urine- and manure-soaked wood shavings, unchanged through several flocks of 30,000 or more birds in a single shed. Excessive ammonia levels in the litter and air cause severe skin burns, ulcers, and painful respiratory problems, as well as pulmonary congestion, swelling, and hemorrhage. A Washington Post writer who visited a chicken shed wrote, “Dust, feathers and ammonia choke the air in the chicken house and fans turn it into airborne sandpaper, rubbing skin raw.” Excretory ammonia fumes often become so strong that chickens develop a blinding eye disease called ammonia burn, so painful that the birds try to rub their eyes with their wings, and cry out helplessly. (16) 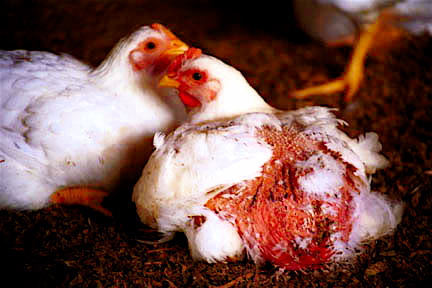 When a flock of broiler chickens reaches between six and seven weeks of age, workers known as “catchers” enter the sheds with instructions to catch and crate birds as quickly as possible in order to transport them to slaughter. Chickens are grabbed roughly by their legs and carried upside down, 3-4 birds per hand, flapping, struggling, and crying.  They are tossed or stuffed into crates which are then loaded onto transport trucks.  Many birds suffer bruising, broken bones, dislocation, and hemorrhage during catching and crating.  Once on the trucks, chickens are subjected to further overcrowding, trampling, and suffocation; food and water deprivation for up to 28 hours; noise, vibration and motion stress; and often grueling temperature extremes.  Millions of birds die during transport from infectious diseases, heart and circulatory trauma, and injuries suffered during catching and crating.  Dead on arrival (DOA) estimates indicate that roughly 17-41 million broiler chickens die during transport every year. (17)

At the slaughterhouse, fully conscious chickens are shackled and hung upside down by their ankles from a moving conveyor belt. The terrified birds are then dragged head-first through an electrified water bath that does not render them unconscious but merely paralyzes them in order to make it easier to slit their throats. (18)  The unrelenting speed of the conveyor belt combined with insufficiently paralyzed birds means inevitably the blade misses some birds, who then proceed to the next station on the assembly line: the scalding tank. In 2011, nearly 900,000 U.S. broiler chickens were condemned post-mortem as “cadavers” (19), meaning they died not from throat-slitting, but from drowning in the scald tank. (20) The common industry term for these tortured cadavers is “redskins,” because the bodies are still full of blood when they enter the scald tank, and turn bright red. (21) 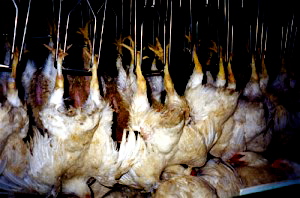 This happens to sensitive birds as smart as mammals, individuals who love their babies and mourn the loss of friends.  Chickens are intelligent, empathic animals with rich emotional and social lives, but on all farms– big or small, factory or “humane”– they are treated as anonymous commodities rather than feeling individuals who love their lives. Their suffering is as unnecessary as their death. To learn more, watch 45 Days: The Life and Death of a Broiler Chicken, here (12 minutes).  Or check out this clip of catching and “humane” slaughter on a small, free-range farm.  You can also visit a photo gallery to see what life is like, week by week, for more than 95% of chickens killed for meat in the U.S.

(6) An HSUS Report: The Welfare of Animals in the Chicken Industry, p.5

(9) An HSUS Report: The Welfare of Animals in the Chicken Industry, p.3

(12)  An HSUS Report: The Welfare of Animals in the Chicken Industry, p. 2

(14)  An HSUS Report: The Welfare of Animals in the Chicken Industry, p. 2

(15) An HSUS Report: The Welfare of Animals in the Chicken Industry, p.3

(16) An HSUS Report: The Welfare of Animals in the Chicken Industry, p.4

(17) An HSUS Report: The Welfare of Animals in the Chicken Industry, p.6

(18) Chickens are only paralyzed rather than fully stunned (“stunning” is the industry term for rendering unconscious) because poultry producers claim that the level of voltage necessary for stunning causes internal hemorrhage with pools of coagulated blood left in the “meat.” (Gail Eisnitz, Slaughterhouse, Prometheus Books: Amherst, New York, 1997, p.166.)

(20) According to the USDA’s own Poultry Slaughter Inspection Training Guide, birds condemned as cadavers “are not dead when they enter the scald vat. When submerged in the hot water, they drown.” (USDA Poultry Postmortem Inspection p.19)

(21) United Poultry Concerns, from “Bleedout Tunnel and Scald Tank” in The Need for Legislation and Elimination of Electrical Immobilization