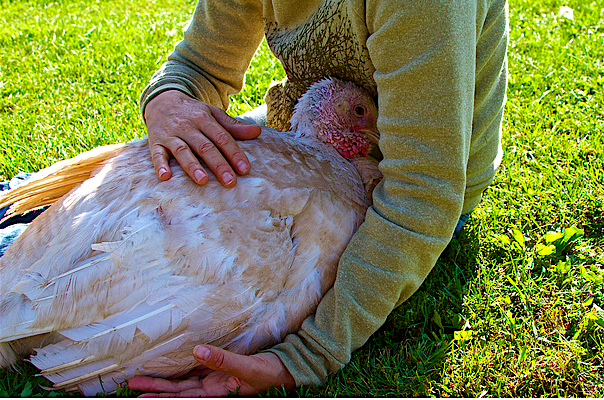 Turkeys are sensitive, social individuals, and in conditions where they are permitted to thrive, they are seen for the complex, adaptive, and intelligent animals that they are. Turkey hens are devoted mothers who care diligently for their young, with broods staying together for 4-5 months and male siblings maintaining a social bond for life. (1) Young turkeys under four weeks of age, known as poults, learn crucial survival skills and information from their mother, including what to eat, how to avoid predators, the geographical layout of the home range, and important social behaviors. (2) During the day, the birds forage together in brush, fields, and wooded expanses, using their beaks to explore and to locate food; by night, they roost high in trees, safe from predators. The size of a brood’s home range varies, but can be as large as 500 acres. (3)

And did you know? 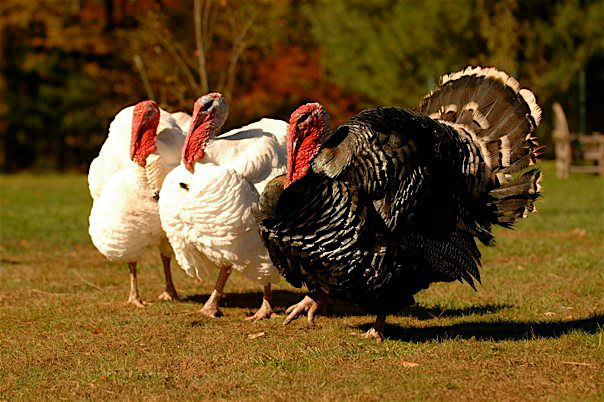 On industrial farms, turkeys never know the comfort of a natural environment or the satisfaction of instinctual behaviors.  In natural conditions, baby turkeys would stay with their mothers for up to five months, but turkeys on commercial farms never experience the safety or warmth of the nurturing presence they instinctively long for.  Instead, they endure confinement, crowding, disease, neglect, abuse, and a short life of intense suffering that ends in brutality. Between 250 and 300 million turkeys are raised for slaughter every year in the U.S. – more than 46 million are slaughtered for Thanksgiving alone.

Male turkeys have been bred to grow so large and breast-heavy that they cannot mate naturally without harming the females. As a result, most turkeys are bred using artificial insemination. According to the Merck Veterinary Manual, “Collecting semen from a chicken or turkey is done by stimulating the copulatory organ to protrude by massaging the abdomen and the back over the testes. This is followed quickly by pushing the tail forward with one hand and, at the same time, using the thumb and forefinger of the same hand to ‘milk’ semen from the ducts of this organ.”(5) Hens are then inseminated by applying pressure to the abdomen around the vent, causing the oviduct to protrude “so that a syringe or plastic straw can be inserted into the oviduct and the appropriate amount of semen delivered.” (6) This is an incredibly invasive, traumatic procedure for the birds. 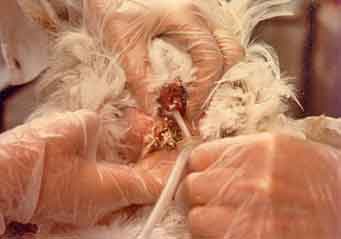 An undercover investigator at a breeding facility where 3,000 turkey hens were inseminated once or twice a week for a year, wrote: “I had to reach into the chute, grab a hen by the legs, and hold her–ankles crossed–in one hand. Then, as I held her on the edge of the pit, I wiped my other hand over her rear, which pushed up her tail feathers and exposed her vent opening. The birds were terrified, and beat their wings and struggled in panic…Having been through this week after week, the birds feared the chute and bulked and huddled up. The drivers literally kicked them into the chute… I have never done such hard, fast, dirty, disgusting work in my life. Ten hours of pushing birds, grabbing birds, wrestling birds, jerking them upside down, pushing open their vents, dodging their panic-blown excrement, breathing the dust stirred up by terrified birds, ignoring verbal abuse from the crew…” (read the full account here).

Eggs are collected from breeding hens and hatched in incubators. The unmothered, frightened hatchlings are transported to larger facilities where they spend the remaining portion of their brief, miserable lives. With up to 75,000 individuals crammed into a single shed, each turkey is given as little as 2.5 square feet of space (19″ x 19″). (7) They can barely move past one another, and as layers of excrement and urine accumulate, their feet and breasts become painfully ulcerated from uric acid. Air quality is also very poor in these crowded conditions, with build-up of aerial pollutants such as dust and pathogens, and noxious gases including ammonia, methane, carbon dioxide, and nitrous oxide. (8) Constant exposure to these pollutants and high ammonia levels is associated with a number of health problems in birds, including painful respiratory tract disorders, keratoconjunctivitis (swelling of the eyelids, discharge, and clouding and ulceration of the cornea), and increased incidence of certain viral and bacterial infections. (9)

Because industrial production facilities use automated feeding, watering, and environmental control, a single person may be responsible for the care of tens of thousands of birds. Sick or injured individuals frequently languish unnoticed. When found, they are typically culled (killed) via “cervical dislocation or the crushing of the head or vertebrae by striking the birds against a wall or with an object.” (10) Overall, the welfare of commercial turkeys is so poor that industry production rates are set to absorb a pre-slaughter mortality rate of 7-10%, which translated to a loss of between 20 and 26 million birds in 2007 alone. (11)

The noxious smell of ammonia combined with the frantic squawking of thousands of confined birds is extremely stressful and causes turkeys to be unnaturally aggressive. But rather than make improvements to the environment, producers instead subject turkeys to excruciating mutilations without anesthetic, simply cutting off “non-essential” body parts that could cause or sustain injury. 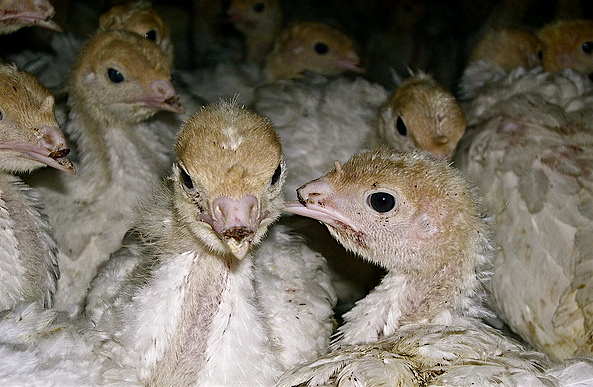 De-snooding involves slicing or scissoring off the snood, the fleshy red protuberance that dangles over the bird’s beak and is used to attract mates. De-toeing, or toe-clipping, is a painful debilitation inflicted with surgical shears, to prevent scratching and subsequent carcass downgrading, and continues to be practiced despite the fact that it is associated with reduced growth rate and higher early mortality. (12) Turkeys are also routinely “beak-trimmed” (also called de-beaking or partial beak amputation) to reduce the impacts of stress-aggression and pecking. Beak-trimming is performed using sharp shears, a heated blade, or a high-voltage electrical current. (13) Turkeys’ beaks, loaded with sensory receptors, are highly sensitive, much like human fingertips, and this painful procedure severs and exposes nerves. Some birds starve to death before they are able to eat again with this painful disfigurement; some die of shock on the spot.

Turkeys today have been bred to grow so fast and so breast-heavy that their bones and organs cannot keep up. These birds frequently suffer from skeletal deformities and lameness so severe that they try to walk on their wings to reach food and water. With bones too weak to support their body weight, many of these birds cannot even stand, and are trampled or expire seeking refuge under feeders.  Forced to grow too large too quickly, turkeys raised for food develop congestive heart and lung disease accompanied by engorged coronary blood vessels, distended fluid-filled heart sacs, abdominal fluid, and gelatin-covered enlarged congested livers. (14)

Horrific acts of abuse and cruelty to turkeys are routine practice on commercial farms, and brutal mistreatment of these gentle birds is consistently reported by undercover investigators. Less than a year after a Mercy For Animals investigation of a Butterball turkey facility led to five workers being charged with criminal cruelty to animals, an October 2012 investigation by MFA revealed:

These abuses are nearly identical to the conditions of extreme cruelty and suffering documented by MFA at a Butterball turkey factory farm in 2011, as well as countless other investigations into turkey farms by Compassion Over Killing, Farm Sanctuary, the Humane Society, and other animal advocacy organizations.

Those turkeys who survive production are slaughtered at 4 to 6 months of age. (15) Loading and transport to slaughter are extremely traumatic. “Catchers” enter the sheds in darkness to collect the birds as quickly as possible, grabbing them roughly by their ankles, carrying them upside down and stuffing them into crowded crates which are thrown onto flatbed trucks.  In the process, many of the turkeys suffer broken wings and legs. Turkey carcasses are often downgraded or condemned in post-slaughter processing as a result of bruises and injuries sustained during transport. (16) In addition, birds are legally transported for up to 36 hours without food or water, in open-sided crates where they are exposed to weather extremes from scorching heat to freezing sub-zero temperatures. Many birds do not survive. In 2007, of the 260 million turkeys slaughtered in the U.S., an estimated 988,000–nearly 1 million birds–died during crating and transport to slaughter. (17)

At the slaughterhouse, turkeys are shackled by their feet and dragged upside down through an electrified water bath designed to stun them before their throats are cut. But in commercial slaughterhouses, the killing lines move so quickly that many of the turkeys are not properly stunned. The next station consists of an automated blade that cuts their throats as they pass by, causing them to slowly bleed to death. Those turkeys who were not properly stunned either suffer a slow painful death, or continue to flap and writhe, and miss the blade. Thousands of fully conscious birds whose throats were not slit proceed to the next station on the assembly line: the scalding tank, that loosens their feathers for removal. They are boiled alive. In 2007, more than 33,000 turkeys were condemned and discarded under the “cadaver” category of the USDA’s annual poultry slaughter report. (18) According to their own glossary, cadavers are birds that “are not dead when they enter the scald vat. When submerged in the hot water, they drown….” (19)

What About Humanely Raised Turkeys? 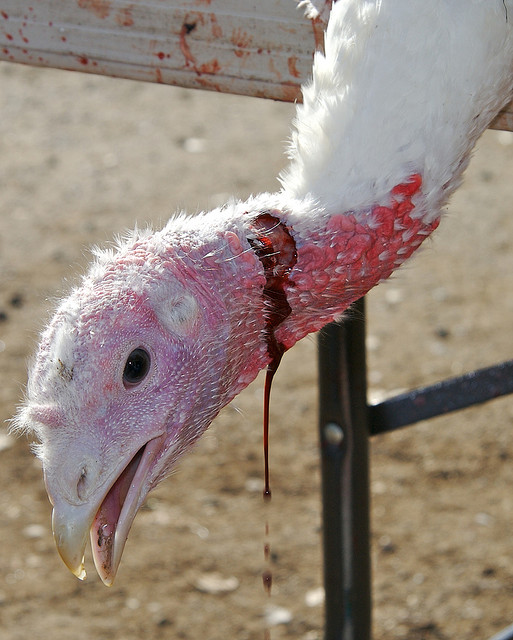 Ultimately, no matter how well they’re treated, there’s nothing humane about harming and killing animals for pleasure– which is all that eating animals amounts to when it isn’t a necessity for survival. If you are concerned with making ethical food choices, please visit our Humane Farming Myth page for important information, as well as our Ethics of Eating page, with links to several essays exploring the ethics of eating animals. And if you’re purchasing eggs, chickens or turkeys under a “cage-free” or “free-range” label, it’s important to realize that humane labeling is often a marketing ploy that preys on consumer willingness to pay more for better treatment of animals. Our Deciphering Humane Labels and Loopholes page provides a full list of current welfare-related packaging claims, and will help you understand the various inhumane practices still permitted under terms like “cage free” and “free range.”

Fortunately, it’s easier than ever to choose a diet based on kindness and compassion. Check out our Guide to Turkey Alternatives and Other Delicious Main Dish Ideas for heaps of holiday (and every day!) options. And be sure to visit our Vegan Food and Nutrition page for more information on transitioning to a cruelty-free diet.