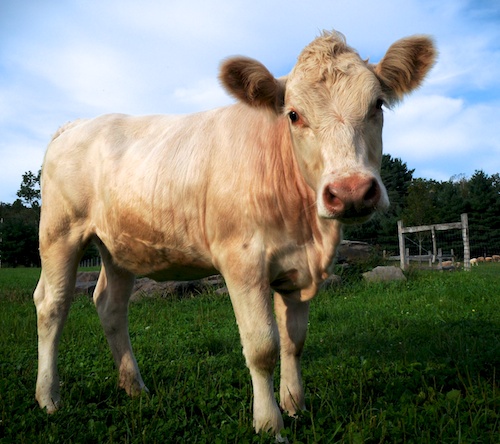 Though they are often mistakenly perceived as being unexpressive, cows are emotionally complex individuals who communicate with each other on many levels. They are loving and affectionate, and after the mother-calf bond, non-familial friendships are their most important and lasting relationships. Cows are also very sensitive–they don’t forget being hurt, and often seem to hold grudges not only against other cows, but also against people who have hurt them or their family members. Under natural circumstances, cattle live in herds with social hierarchies and form lifelong bonds with each other.  At any given time, a herd will include several generations of relatives, with the oldest members being more than 25 years old.

Historically, cows have been revered by many cultures for their extremely gentle disposition and maternal instincts. The bond between a mother and her calf is as strong as any in nature, and lasts for years after the baby has weaned and matured. When they are separated from their families, friends, or human companions, cows grieve deeply over the loss. Researchers report that cows display distress after even a brief separation from a loved one.

Just like humans, cows vary widely in intelligence and personality. Some seem bold and adventurous while others are shy and reserved. Some cows are very clever but some learn slowly. They can be friendly or aggressive, relaxed or nervous. Like all animals, they strive to feel happy and safe, and to be free from fear and pain.

According to the USDA, 34.2 million cattle were slaughtered for commercial beef production in the United States in 2010. (1) Although cow/calf operations vary, cattle raised for beef often begin life on pasture or rangeland.  Calves are typically weaned from their mothers and moved to feedlots at around 6 months of age, where they are intensively confined and “finished” for slaughter on a grain diet to increase weight gain more rapidly. While the initial grazing period satisfies some instinctual needs of cattle, they face many hazards in unnatural range confinement. Restricted within a particular area, cattle often have no refuge from extreme weather. Many die as a result of scorching heat, hypothermia and seasonal floods. In 2009, approximately 91,000 cattle in North Dakota died due to flooding and extreme winter weather. (2)

Domesticated cattle are also vulnerable to attacks by coyotes and other wild predators. In a single year, native predators killed nearly 190,000 cattle. (3) As a result, U.S. Wildlife Services kills millions of native wild animals each year. These keystone predators are invaluable to the local ecosystem, where they play a crucial role in keeping other animal populations in balance. In addition, native wildlife must compete for resources with these domesticated animals. In the 20th century, more than 98% of prairie dog populations were wiped out, primarily due to livestock rearing. (4)

Male calves (called “bulls” when intact and “steers” after castration) raised for beef are virtually all castrated, without pain relief, to reduce aggression and improve tenderness and meat quality. (5) They are typically castrated at 2 and ½ months old. (6) There are three main castration methods:

Rubber ring castration: a tight rubber ring applied to the scrotum above the testicles results in lack of blood flow, killing the testicles, which fall off after two to four weeks. 47.3% of calves are castrated via rubber ring.

Crushing of scrotum (Burdizzo method): Crushing castration is performed by crushing the spermatic cord, scrotum, nerves, and vessels of each testis with a pliers-like clamp, without breaking the skin. The clamp is held in place for several seconds and may be applied twice per testicle. 3.5% of calves are castrated via scrotal crushing. (7)

Calves experience extreme pain with all three castration methods, but the industry is permitted to perform these and all other routine mutilations without pain killer.

In addition to castration, the males’ nerve-filled horns or horn buds are either cut or burned off, again without anesthetic or pain killer. If the cow is less than two months old, his horns are still considered buds and this process is known as disbudding.  With disbudding, mechanical methods remove the horn bud and surrounding skin with a sharp object. Spoons, gouges, or knives cut out the horn bud, and the resulting skin may then be treated with caustic chemicals. Cups or scoops operate in a scissor-like fashion—the tool is placed over the horn bud, pushed down into the head with force, and then lever arms close, cutting out the bud with some surrounding skin. (8, 9). 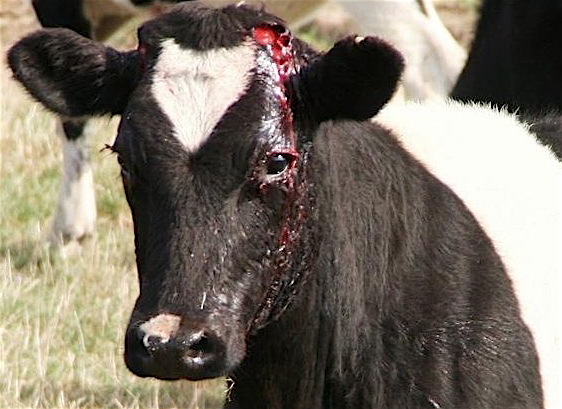 Cautery, or hot-iron, disbudding is performed with a glowing, red-hot, cup-tipped tool that is placed on and slowly rotated over the horn bud for about 10 seconds, burning through the skin and destroying the tissue that generates the horn. The resulting tissue is either left to fall off or is removed by blunt impact. After two months of age, when the horns have begun to grow, they are removed through amputation dehorning, wherein a saw or large guillotine or shears is used to cut the horn near its base. In this procedure, some of the surrounding skin is removed as well. Guillotine or shears can and sometimes do fracture the skull during dehorning. (10)

In reports, hot-iron disbudding “is associated with” extreme pain response, and “incites escape behavior, such as falling down, rearing, head jerking, and pushing, which are associated with intense pain.” (11)  In other words, disbudding and dehorning cause these animals profound suffering.

45% of the roughly 35 million U.S. cattle slaughtered for beef every year are also branded with a hot-iron brand to provide proof of ownership and identification. Hot-iron brands are heated to approximately 520°C (968°F), then pressed into the skin of restrained cattle for 5 to 10 seconds. (12)  This procedure, which is known to cause the animals extreme pain– they thrash, cry out, and roll their eyes wildly– burns the hide and underlying tissue, leaving a hairless, permanent scar. 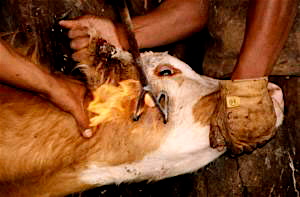 Freeze branding is performed in a similar way, but instead with a very cold iron that destroys pigment-producing cells and turns the affected hair permanently white, without damaging the hide.  While both freeze branding and heat branding elicit pain responses in cattle, freeze branding is considered substantially less painful, yet only 1% of i.d.-altered cattle are marked using this method. (13) 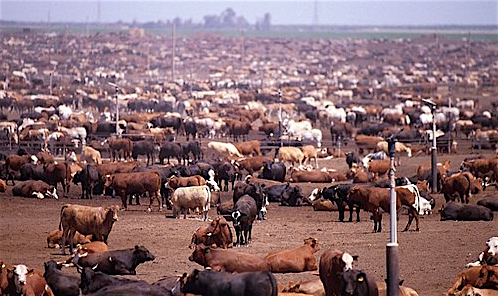 After several months of grazing, cattle are transported to feedlots, also called CAFOs. The goal of the feedlot is to add significant weight in a short period of time. The largest confined animal feeding operations now house up to 100,000 cattle at a single location. (14) Over the next 6-8 months, they eat a high protein grain-based feed, consisting of corn, soy, but also animal by-products from slaughterhouses, including “trimmings that originate on the killing floor, inedible parts and organs, cleaned entrails, fetuses…,” as well as chicken manure. However, cattle are naturally herbivores.  Abnormally concentrated diets result in the formation of organic acids,which can lead to painful and sometimes fatal rumen acidosis in cows.

Approximately 90% of industrially farmed U.S. cattle have growth hormones added to their feed. (15) In studies, these hormones have caused sufficient concern for human health that the European Union has banned their use in beef production, as well as the import of hormone-treated beef. In addition to growth hormones, approximately 83% of industrially farmed cattle are treated with antibiotics. (16) Because massive quantities of manure are reused as fertilizer, residues from the growth hormones and antibiotics leech from manure and contaminate local streams and lakes. These chemicals have a devastating effect on freshwater ecology-especially fish and amphibians.

At 14-16 months old, the 1,200 pound cattle are rounded up and transported to a slaughterhouse. Considering that they are capable of living 25 years, these animals are essentially adolescents. Loading and transport to the slaughterhouse is extremely stressful. Like all animals, cattle have an innate fear of unfamiliar surroundings, and they are often abused by handlers. Current laws allow transporters to travel up to 28 consecutive hours without a rest period. The 28-hour period can be extended to 36 hours by simply submitting a written request. During this time, the animals are deprived of food and water, and vomiting and diarrhea are common due to hours of vibration and maneuvering. (17) 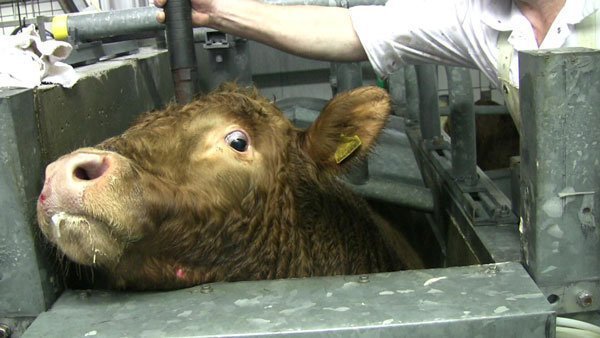 When the surviving cattle arrive at the slaughterhouse, they are supposed to be stunned first so they are insensible to pain, according to federal law. Industry practice is to shoot the cow in the head with a “captive-bolt” pistol that thrusts a metal rod through the skull and into the brain. However, this rarely-enforced law is routinely violated since shooting a struggling animal is difficult and production lines move at a relentlessly fast speed. As a result, many animals move through the slaughter process kicking and screaming as they are skinned and dismembered while fully conscious.

An April 10, 2001 Washington Post exposé revealed: “It takes 25 minutes to turn a live steer into steak at the modern slaughterhouse where Ramon Moreno works… The cattle were supposed to be dead before they got to Moreno. But too often they weren’t. ‘They blink. They make noises,’ he said softly. ‘The head moves, the eyes are wide and looking around.’ Still Moreno would cut. On bad days, he says, dozens of animals reached his station clearly alive and conscious. Some would survive as far as the tail cutter, the belly ripper, and the hide puller. ‘They die,’ said Moreno, ‘piece by piece.’”

(11) Humane Society of the United States Report: The Welfare of Calves In the Beef Industry http://www.humanesociety.org/assets/pdfs/farm/welfare_calves.pdf