Rabbits for Meat and Fur 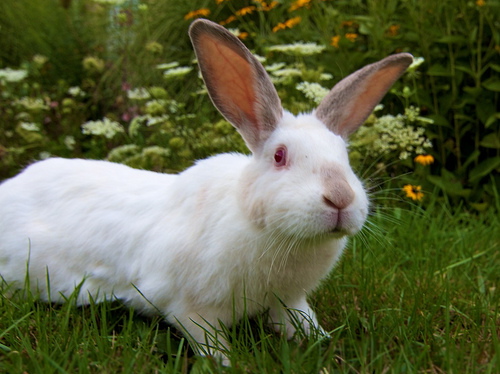 Unlike cats and dogs, who evolved as predators, rabbits evolved as prey, which makes earning their trust much more difficult–they are hyper-alert, wary, easily frightened and always prepared to bound away at a moment’s notice. It is a testament to their loving personalities and gentle natures, then, that despite requiring significantly more work to form a trusting and affectionate bond, rabbits are one of the most preferred companion animals in the U.S. 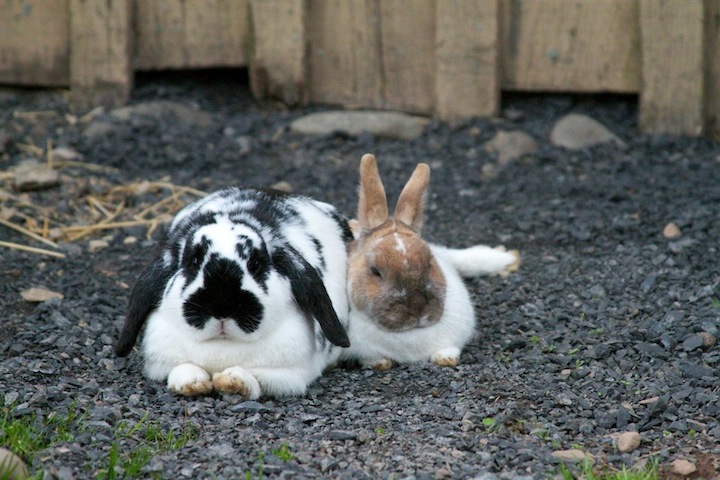 Like all animals, rabbits have their own language for communicating, mostly body language, but a few sounds as well.  They express affection with a number of gestures, especially mutual grooming. When they feel affectionate, males and females will take turns gently licking each other on the forehead and around the ears. In contentment, the recipient softly grinds his or her teeth, the rabbit’s funny form of purring. (1) Another expressive gesture is the chin rub, which functions much the same as it does in cats. Rabbits have special scent glands on the underside of their chins, and pleasurably rub their chins on objects they like. When they are feeling especially joyful, rabbits express an exuberance by wildly hopping and dancing. And when rabbits live with human companions they trust and enjoy, they love to snuggle and will seek out human company. Some will also groom their human’s hair. (2)

Rabbits endure the unusual distinction of being, simultaneously, one of the most beloved and most abused animals in the country. Rabbits are horrifically exploited by the pet breeding industry, the vivisection/laboratory research industry, the fur industry, and the meat industry.  USDA estimates indicate that roughly 5 million rabbits are kept as pets in U.S. households, while between 2 and 8 million are slaughtered every year for meat. (3)

There are no laws regarding living conditions for rabbits on commercial rabbit meat farms. Known in the industry as “rabbitries,” these confinement operations are very similar to battery cage hen operations, consisting of long rows of wire-mesh cages with waste pits. Crammed several to a cage, like egg-laying hens, each rabbit has less space to move around in than a single sheet of paper. (4) Although rabbits are highly sensitive to the ammonia from their waste, deep pits permit months of excrement to accumulate and go unchanged.  Like all animals, rabbits possess a strong drive to explore their environment and to perform natural behaviors.  Cruel confinement causes them extreme mental anguish and suffering.

Most rabbits are still babies when they are slaughtered at the end of their brief, miserable lives. Although companion rabbits can live for 10 to 15 years, the majority of rabbits raised for meat are killed at three months of age. Known as “fryers,” these baby rabbits weigh only 1.5 – 3.5 pounds. A small percentage of rabbits raised for meat are slaughtered at 8 months old, or 4 pounds; the industry refers to them as “roasters.” (5)

Like chickens and turkeys, rabbits are excluded from the Humane Methods of Slaughter Act, a federal law that says animals must be rendered unconscious before being killed. Rabbits may be killed by any of the following methods: cervical dislocation (neck-breaking), captive bolt pistol, striking the head with a blunt object (usually an iron pipe), decapitation and throat cutting. (6) 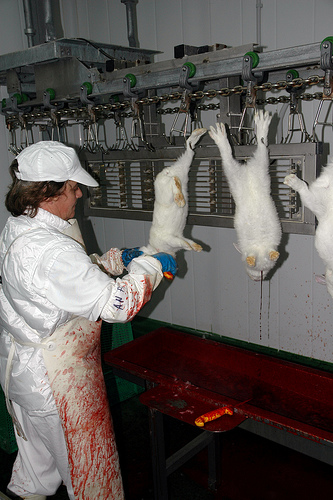 No other animal cherished as a pet in this country is so often killed for its meat. Rabbits provide a perfect example of the moral schizophrenia with which we approach the issue of eating animals, and the arbitrariness with which we decide that some animals deserve to live and be loved, while others we condemn to a brutal fate. In fact, we have no biological or nutritional need to eat any animals, therefore our consumption of them is merely for pleasure. If you believe that it is wrong to harm and kill animals for pleasure–the reason most people oppose dog-fighting, for example–then please remove animal products from your menu. Visit our Vegan Nutrition page for tips and resources to help make your transition to a cruelty-free diet easy, delicious and nutritious.