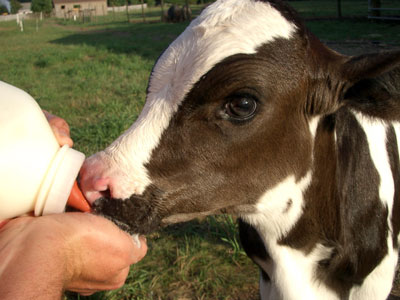 Loving Dylan was destined for slaughter as a veal calf before his rescue by Woodstock Farm Animal Sanctuary.

A Byproduct of the Cruel Dairy Industry

Like all mammals, cows only produce milk to feed their babies. Consumers have been so brainwashed to believe that milk-drinking is important, that we rarely stop to consider the absurdity of drinking breast milk as adults; and not only breast milk, but the coerced and stolen breast milk of another species, made by those mothers for the sole purpose of nourishing their young. Not only is our consumption of cows’ milk unnecessary, but it is unnatural, unhealthy, and cruel.

Veal is a byproduct of the dairy industry.  Humans are able to consume all the milk and dairy they want (but don’t need) only by keeping cows pregnant and lactating, and then taking away the calves for whom the milk is intended. The millions of cows on U.S. dairy farms are forced into a vicious cycle of continuous pregnancy and removal of their babies. Female calves are raised  to replace their mothers in the dairy herd, but male calves are useless to the dairy industry.  While a small percentage are raised for breeding purposes, dairy calves are not considered the proper breed for beef.  It is this surplus of newborn male dairy calves that supplies the veal industry.  There is no veal industry without the dairy industry.

About 700,000 veal calves are slaughtered in the United States annually. (1) Two types of veal are recognized by the USDA: bob veal, produced from calves slaughtered at up to three weeks of age, and special-fed veal, from calves slaughtered around 16-18 weeks. Calves raised for both bob and special-fed veal are fed liquid milk-replacement diets. Currently, the majority of U.S. calves raised for veal are reared indoors in individual stalls typically measuring 30 inches wide by 66 inches long. (2) Although commonly referred to as “crates,” veal stalls are constructed with open backs and partial walls separating each individually confined calf. Calves in veal crates spend their entire lives tethered or chained to the front of the narrow stall, restricting virtually all movement until they reach slaughter weight.  This lack of exercise prevents normal muscle development, to satisfy gourmand preferences for tender baby flesh. 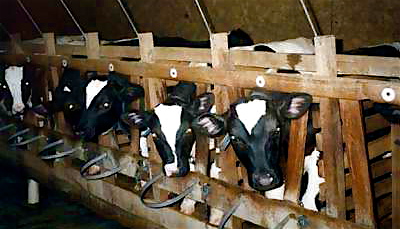 Cows and their babies share a powerful and immediate bond. In natural herds, mothers and their offspring remain together as grazing partners for years after the babies have matured to adulthood. (3) But on dairy farms small or large, factory or free-range, babies are forcibly removed from their mothers usually within hours of birth. Mother cows continue to search and call frantically for their babies for days or weeks after their calves have been taken away. This cruel separation causes them extreme sorrow and anxiety.  Author and historian James McWilliams writes, “I became a vegan the day I watched a video of a calf being born on a dairy factory farm. The baby was dragged away from his mother before he hit the ground. The helpless calf strained his head backwards to find his mother. The mother bolted after her son and exploded into a rage when the rancher slammed the gate on her. She wailed the saddest noise I’d ever heard an animal make, and then thrashed and dug into the ground, burying her face in the muddy placenta.”

Calves have an overwhelming instinct to search and suck with their mouths.  Sucking behavior evolved to help them locate food. On most U.S. commercial veal farms, calves are bucket-fed liquid milk replacer twice per day, in contrast to the four to ten daily suckling sessions they would naturally have with their mothers. The need to suck is not relieved by bucket-feeding, and denial of this important, instinctive behavior results in non-nutritive sucking of such objects as the enclosure or tether, or of other calves, known as cross-sucking. (4) Cross-sucking, which is believed to increase disease transmission, has never been reported in calves raised by their mothers. Calves have even been documented trying to suckle the fingers of slaughterhouse workers, in the final moments before they are mercilessly killed by the same hands.

Cattle are ruminants, animals who digest their food in two stages. They digest grass and other fibrous plants by chewing and swallowing once, regurgitating later, and chewing again at their leisure, a practice commonly known as “chewing the cud.” Calves raised outdoors begin to eat grass after a few weeks of age; by four months, they may spend six hours a day grazing and several hours ruminating. (5) By contrast, the majority of calves in the U.S. veal industry are fed only liquid milk replacer. This unnatural diet is intentionally iron-deficient in order to pale the calves’ flesh, as restaurants and merchants will pay more for whiter meat, which is considered more aesthetically pleasing.  At least one in four calves suffers from diet-induced anemia, which makes their already weak-from-lack-of-exercise limbs even more frail, compromises their fragile immune systems, and contributes to more “downed” calves (calves too weak or injured to stand) and the increased likelihood of abuse by workers. (6)

Restriction of Movement and Lack of Exercise

The effects of anemia and malnourishment are further compounded by lack of exercise that results from intensive confinement of veal calves, intended to prevent normal muscle growth.  In a natural or pasture herd, calves play vigorously, galloping, bucking, and kicking, and if other calves are present, will also engage in play fighting. (7) Calves in the veal industry, denied exercise, suffer extreme muscle weakness and poor coordination, as well as significant instinct-frustration and emotional anguish.

Not only can they not play, but calves tethered in stalls or confined in narrow pens cannot adopt the postures they would choose for restful sleep, comfort, relaxation or most effective body temperature regulation. They cannot stretch. They spend their entire miserable existence on bare wooden slats or plastic-coated metal grating, enduring discomfort and pain from not being able to lie down or relax naturally.  The preferred sleeping position of calves, for increasing warmth and feelings of security, is to curl up with the head tucked into the flank; calves on tethers or in narrow stalls are unable even to sleep in this position. (8)

Another common sign of stress and emotional suffering in veal calves is the display of “sham” or “vacuum” behaviors, that is, the expression of instinctive behaviors even in unnatural environments where those behaviors cannot serve a useful function or effect a desired outcome. On all-liquid diets, calves cannot perform the normal behaviors of rumination and chewing. But the natural instinct to manipulate material with their mouths is so strong, that milk-fed calves will perform “sham” chewing, engaging in extended laborious chewing motions despite having nothing to chew. (9)  Boredom and despair also lead them to develop purposeless oral behaviors including tongue-rolling, sucking, licking, and biting inanimate objects.

For calves separated from their mothers, social contact with other calves is particularly important.  All cattle are social animals who obtain physical, physiological, and psychological comfort from each other. (10) In normal conditions, calves begin to form friendship and peer relationships at around two weeks of age.  In a close study of semi-wild cattle, the majority of calves formed close friendships with one or two non-related calves of a similar age, and maintained those bonds over three or more years. The scientists concluded that after mother-calf bonds, the most important and lasting relationships between cattle are non-kin friendships. (11) Calves on veal farms are denied both mother and friends. They never feel safe or loved, they never feel anything but helplessly abandoned and alone.

In these restrictive and unhealthy environments, veal calves suffer additional anguish from an inability to explore, inability to groom, and frequent serious illnesses, most commonly pneumonia and diarrhea, both of which are often fatal. (12)

In the United States, calves only hours or days old can be transported for up to 28 hours without food, water or enough space to lie down. During transport to auction and to slaughter, calves are terrified, bruised, dehydrated, malnourished, trampled, exposed to disease, and horribly abused by workers when weakness, panic, or impaired mobility from anemia and lack of exercise prevent them from moving quickly. As they are forced onto and off of trucks, or prodded into slaughter lines, veal calves wobble, cower, stumble, and frequently collapse.  Many are unable to stand at all. 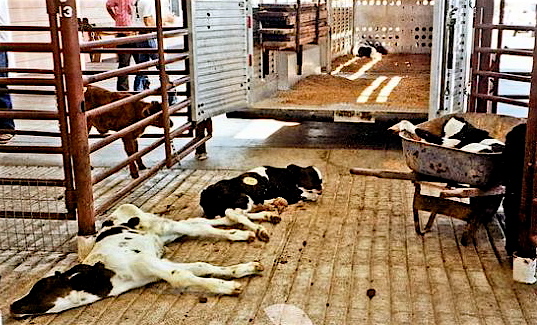 Veal calves unable to walk or even stand for transport to slaughter. (photo: Farm Sanctuary)

According to the federal Humane Methods of Slaughter Act, calves should be properly stunned before slaughter– that is, “rendered insensible to pain by a single blow or gunshot or by electrical, chemical or other means that is rapid and effective, before being shackled, hoisted, thrown, cast or cut.” The most common method of stunning veal calves is an electric shock. During electrical stunning, current is passed through the animal’s brain to induce an epileptic state.  During such a seizure, they are believed to be insensible to pain. However, in several studies, calves stunned by this method have been shown to quickly regain consciousness, anywhere from 22 to 60 seconds after electric shock. (14, 15)  Footage from countless undercover investigations confirms this problem, and repeatedly reveals horrific abuse of calves during transport and slaughter.  A recent Humane Society investigation at a veal calf slaughterhouse uncovered the following:

We have no biological or nutritional need for cows’ milk or dairy products, therefore our consumption of them is merely for pleasure. This consumption, and indeed the entire dairy industry, is predicated on the act of stealing mothers’ milk from other animals, stealing the babies for whom the milk is intended, and, finally and brutally, stealing life—their very bodies—from babies and mothers alike.  If you believe that it is wrong to harm and kill animals for pleasure, then you should not consume milk or dairy products. Please visit our Milk Myths page to learn more about the humane and health myths of dairy, and visit our Vegan Nutrition page for tips and links to delicious dairy alternatives.

(6) A Humane Society Report: The Welfare of Animals in the Veal Industry