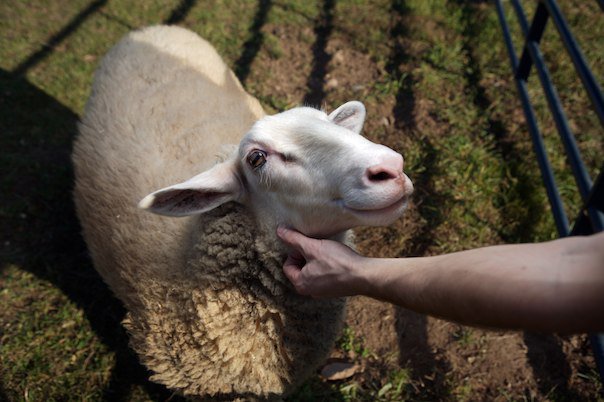 Harming Animals for Pleasure Is Not Humane

The very existence of labels like “free range,” “cage-free,” and “humane certified” attests to society’s growing concern for the welfare of animals raised for food. But any time consumers of meat, eggs or dairy advocate for “humane” treatment of farm animals, they confront an unavoidable paradox: the movement to treat farm animals better is based on the idea that it is wrong to subject them to unnecessary harm; yet, killing animals we have no need to eat constitutes the ultimate act of unnecessary harm.

Scientific evidence has irrefutably demonstrated that we do not need meat, milk or eggs to thrive, and that in fact these foods are among the greatest contributors to the leading fatal Western diseases. Unlike animals who kill other animals for food, we have a choice. They kill from necessity. We do so for pleasure. There is a huge moral difference between killing from necessity and killing for pleasure. When we have plentiful access to plant-based food options, and a choice between sparing life or taking it–there is nothing remotely humane about rejecting compassion and choosing violence and death for others just because we like the taste of their flesh, and because they cannot fight back. Might does not equal right. 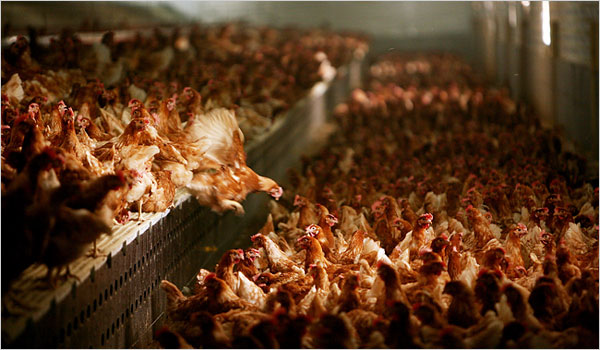 Under misleading welfare labels, confinement operations like this one sell their eggs as “cage-free.” (photo: Sally Ryan, New York Times)

While it’s sometimes possible to find small farms where the animals have better lives (though this in no way justifies exploiting or killing them), it’s important to realize that humane welfare labeling is largely a marketing ploy that preys on consumer willingness to pay more for better treatment of animals.  If you’re buying “cage free,” “free range” or “humane certified” animal products from a grocery store, you are more than likely being deceived about the welfare of animals raised for food. Because “humane” labeling terms are not meaningfully defined or enforced, suppliers are notorious for manipulating intentional loopholes in these loosely interpreted standards.  In a recent report, even Trader Joe’s “cage free” egg suppliers were found to debeak their hens, which means the birds also live in severely crowded facilities. Massive confinement operations, like Sparboe Farms and Perdue Farms, that confine millions of chickens in deplorable conditions, are awarded “humanely raised” certification through a USDA-sponsored fraudulent labeling scheme. And there is simply no such thing as a happy dairy cow.

Our Deciphering Humane Labels and Loopholes page provides a full list of current welfare-related packaging claims, and can help you understand the various cruelties still permitted under terms like “cage free” and “free range.” Ultimately, no matter how well they’re treated, there’s nothing humane about harming and killing animals we don’t need to eat.

Many of the worst cruelties inflicted on animals in factory farms are also routine practices on small, free-range farms.  These include:

Sexual violation and exploitation of reproductive systems: The forcible insemination of restrained females, often painfully and always without their consent, is standard practice on farms large and small. Forcibly inseminating others against their will is considered a serious crime when the victims are human. Yet we sexually violate billions of individuals this way every year, breeding animals for the sole purpose of exploiting and killing them. Sexual abuse is not humane. 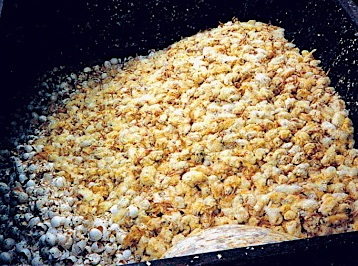 The systematic sabotage of motherhood: On all farms, big or small, dairy cows have their babies torn away from them so humans can drink the milk intended for their young. This cruel separation is devastating for cows and their calves, who are slaughtered for veal if they are male. And while the term “mother hen” derives from the fact that hens are such protective, nurturing mothers, “free-range” egg farms perpetuate unfathomable cruelty by buying their hens from egg hatcheries where confined breeding hens never even get to see their babies, and millions of day-old male chicks are brutally killed because they’re of no use to the egg industry.

Routine mutilations without anesthetic: Castration (males except breeders), dehorning (male and female cows and goats), nose rings (free-range pigs), and ear tags or flesh “notches” (sheep, pigs, cows, and goats) are all painful mutilations commonly practiced on even the most “humane” farms, all without anesthetic.  Most eggs sold in stores under free-range or cage-free labels come from hens who are painfully debeaked. 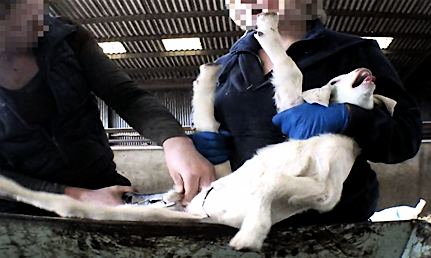 Denial of instincts and preferences: Even on small, “humane” farms, animals have no control over the most important aspects of their lives. Consider that the following is true for all animals on all farms, however small or so-called “humane”:

“Humans decide where they will live; if they will ever know their mothers; if, and how long, they will nurse their babies; when, and if, they will be permitted to see or be with their families and friends; when, where, or if they will be allowed to socialize with members of their own species; when, how, and if, they are going to reproduce; what, when, and how much they will eat; how much space they will have, if any; if, and how far, they will be allowed to roam; what mutilations they will be subjected to; what, if any, veterinary care they will receive; and when, where, and how they are going to die.” (1) If these were the circumstances of your brief and unfree life, at the end of which you would be forcefully restrained, attacked and slaughtered against your will, at a fraction of your natural lifespan, and for completely unnecessary reasons– would you maintain that you had been humanely treated? 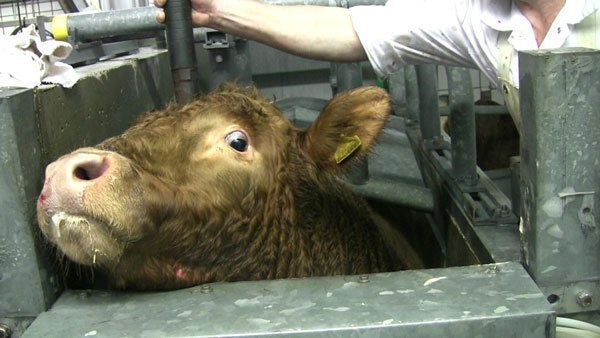 At the slaughterhouse, cows are stunned by having a long, retractable bolt shot into their brains before their throats are slit. Many are terrified. All desire to go on living. (photo: CCTV for all slaughterhouses)

“Humane” Farming is Not Environmentally Sustainable

In spite of the intensive confinement model that presently dominates Western and, increasingly, global farming of animals for food, livestock now use 30 per cent of the earth’s entire land surface. If we humanely pastured all 100 million cows in the United States on grass, cattle would require (using the conservative estimate of 10 acres per cow) almost half the country’s land–and this excludes the land we would need in order to raise all of the pigs, chickens, sheep and goats free range. (2)

In addition to land, there is the issue of greenhouse gases. First, it is an unavoidable fact of ruminant digestion that methane is released into the atmosphere, trapping heat with alarming efficiency. Secondly, livestock make manure that produces nitrous oxide, an even more efficient heat trapper. U.S. livestock generate a billion tons of manure per year, contributing a whopping 65 percent of the planet’s total human-caused nitrous oxide emissions. (3) So if we sent all those cruelly confined cows out to pasture?  It is estimated that pasture-raised cows produce 4 times more greenhouse gases than cows raised in confinement. This is because cows subsisting on grass, as nature intended, grow much slower than cows fed on grain. Therefore it takes them significantly longer to reach slaughter weight. The longer it takes cows to grow, the more methane and nitrous-oxide they are emitting. (4) Free-range chickens also have a 20 percent greater impact on global warming than conventionally confined chickens. (5) 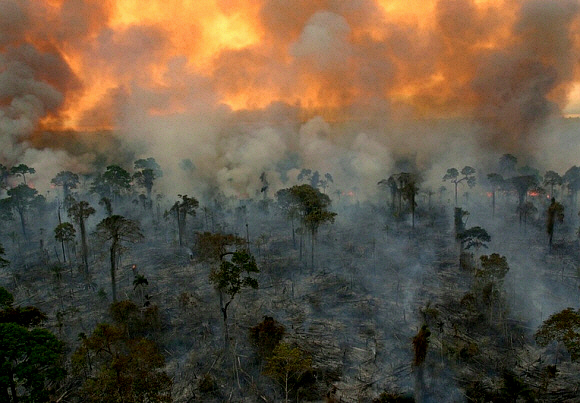 Habitat destruction is the number one cause of species extinction. Switching to more humane, free-range grazing practices for confined animals would drastically increase already perilous levels of wildlife habitat loss, and species endangerment or extinction. Some 70 percent of former forests in the Amazon have been cleared for cattle grazing (6). Rainforests are also being razed at an astonishing rate to make room for soy plantations, whose crop does not go to make tofu or vegetarian foods, but is ground into soymeal and fed to livestock because it causes animals to reach slaughter weight more quickly. The conversion of natural wildlife habitats entails the replacement of rich ecosystems with monocultures poor in biodiversity. Habitat modification already affects more than 80% of the globally threatened mammals, birds and plants, (7) and livestock grazing is the biggest reason that plant species in the United States become threatened or extinct. Ultimately, grazing leads to soil erosion and eventual desertification of once fertile land. (8) 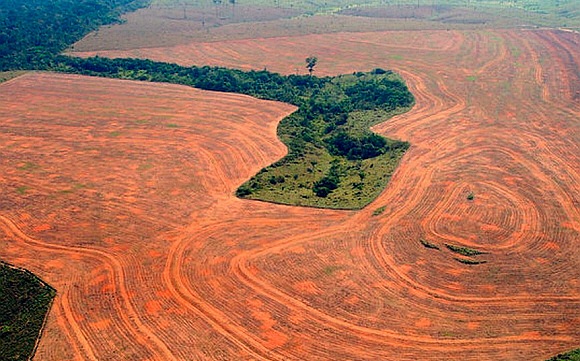 Pocket of degraded rainforest surrounded by lifeless soybean plantations. A decade ago ago this was all pristine rainforest, habitat for over 1000 species of butterfly and 500 species of birds. (photo: Alberto Cesar/Greenpeace/AP)

None of this is sustainable. When it comes to the environmental footprint of your food choices, the most important question is not, “How far did my food travel?” but, rather, “Did it come from an animal, or from a plant?”

The main reason that abuse and torture of food animals happens on commercial farms is not because factory farming is corrupt. It is not even because Big Ag execs are greedy, or because factory farm workers are often desensitized and sadistic, though all of these are factors. But the most important reason abuse and torture of food animals happens is that consumers, including “humanely raised” customers, are sending the message that it is morally acceptable to harm and kill animals for pleasure. You cannot pay people to inflict unnecessary violence on animals (killing them), and then make the case that that those animals should not experience unnecessary suffering. It is a morally schizophrenic, and therefore ignorable, position, one that is easy for producers and most consumers to dismiss. If animals’ lives don’t even matter enough for us to spare them when we have access to plentiful food alternatives, then on what grounds could their suffering possibly be said to matter?

As long as we’re willing to to treat sentient individuals as units of production, and numb ourselves to the fact that we are inflicting gratuitous violence and death, then we’re doing nothing more than reaffirming the core values of factory farming: that animals’ lives have no intrinsic worth, and that it is okay to exploit and kill them even when doing so is not necessary to our survival. As historian James McWilliams has written:

“Supporting alternatives to the industrial production of animal products serves the ultimate interest of industrial producers. The decision to eat animal products sourced from small, local, and sustainable farms might seem like a fundamental rejection of big business as usual. It is, however, an implicit but powerful confirmation of the single most critical behavior necessary to the perpetuation of factory farming: eating animals. So long as consumers continue to eat meat, eggs, and dairy — even if they are sourced from small farms practicing the highest welfare and safety standards — they’re providing, however implicitly, an endorsement of the products that big agriculture will always be able to produce more efficiently and cheaply. And thus dominate.” (9)

The Death of the Myth of Humane Farming 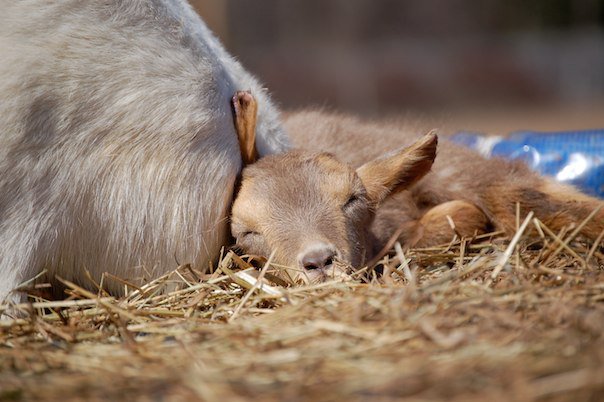 Fern the goat, rescued from a small goat meat and milk farm, happy and healing at Woodstock Farm Animal Sanctuary.

Animal agriculture is “the most large-scale, institutionalized control of female reproduction, sex, and bodies-in-general that has ever existed.” (10) It is a mistake to think of small, so-called “humane” farmers, and large, industrial producers, as occupying vastly different moral terrain. They are gradations along the same continuum of exploitation and needless harm. Small and large farmers alike conceive of animals as property, commodities and units of production, here for us rather than with us. If we can look at animals as intelligent and loving and playful as our own cats or dogs, and think: Yes– but my desire for a fleeting pleasure is worth more than that individual’s entire life– then we can not make any meaningful arguments about how those animals should be treated. It is no more humane to inflict unnecessary death on animals who want to live, than it is to inflict unnecessary suffering on those who wish not to suffer.

(6) Food and Agriculture Organization: Livestock a Major Threat to Environment