Sheep for Meat and Wool 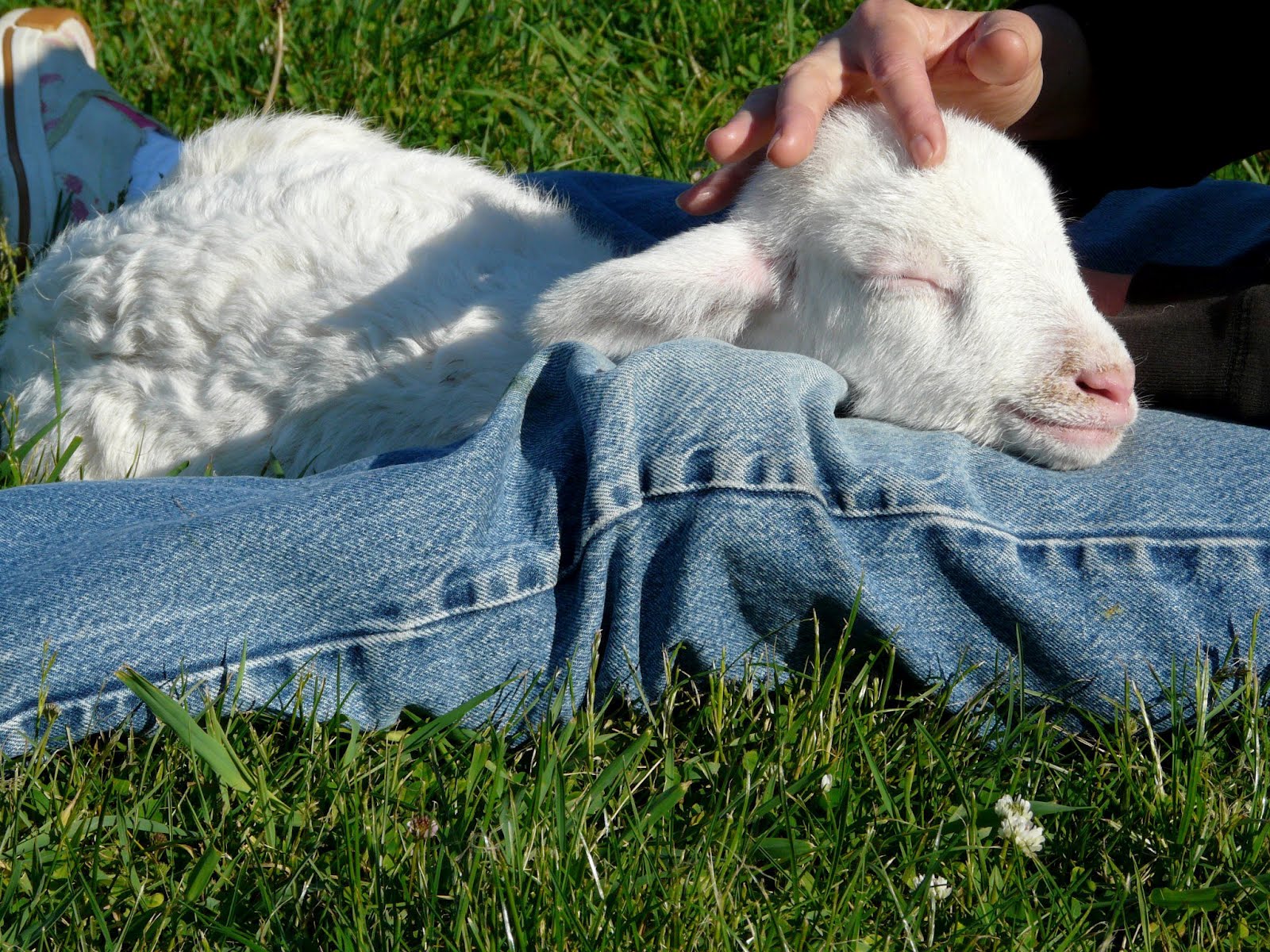 To my mind, the life of a lamb is no less precious than that of a human being. The more helpless the creature, the more that it is entitled to protection by man from the cruelty of man.  Mahatma Gandhi

Sheep are intelligent, inquisitive animals with good memories. They remember the animals and humans they’ve met, and form lasting friendships with their flock mates. Some neuroscientists now believe that the sheep’s brain recognizes faces in the same way a human’s does. In one study, a sheep was able to correctly identify a human face on a screen 50 times out of 50 chances. The same sheep could also remember the faces of up to 50 of his sheep friends, even when he hadn’t seen them for years. (1)

In nature, sheep travel for miles in complex, close-knit family structures, over varied landscapes and terrain. Each herd stays together and co-operates for protection. As they wander, one sheep will periodically venture ahead of the group as a kind of lookout. A second sheep follows, then signals to the rest of the herd that it is safe to come along. The sheep that act as scouts tend to do so throughout their lives. (2)

When observed for extended periods, sheep appear to form individual friendships, grazing with the same companions consistently. Researchers believe that, like humans, sheep actually think about their friends even when those sheep are not around. They also become distressed or despondent when their preferred companions are missing from the flock. (3) 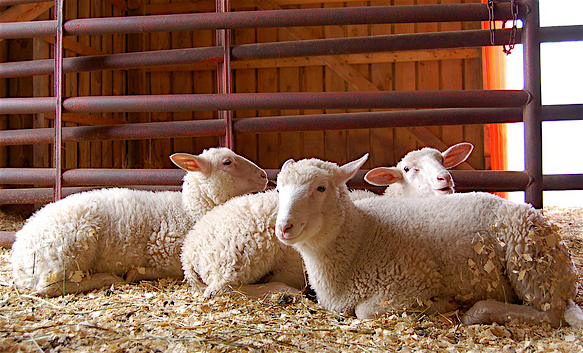 Wool Over Your Eyes

Sheep are selectively bred to produce unnaturally high quantities of wool. Without any human intervention and selective breeding, sheep grow just enough wool to protect themselves from temperature extremes. The process of wool shearing can be very stressful for sheep, and, especially on larger farms, is often traumatic. It is well documented that the combination of forcible restraint, along with the pressure and heat from shears, causes a major leap in cortisol levels—the primary indicator of fear. Too, shearers are usually paid by volume, not by the hour, which leads to quick work without regard for the welfare of the sheep. Says one eyewitness, “[T]he shearing shed must be one of the worst places in the world for cruelty to animals … I have seen shearers punch sheep with their shears or their fists until the sheep’s nose bled. I have seen sheep with half their faces shorn off …”

Contrary to popular belief, sheep who are bred for their wool are not allowed to live out their days in the pasture.  After a few years, the wool production declines and it is no longer deemed profitable to care for these older sheep.  Sheep raised for wool are almost always killed for meat.

Sheep raised for wool and meat also face a variety of painful mutilations. Some of the practices are aimed at reducing the risk of fly-strike, where flies lay eggs in feces that is stuck to the animal’s hindquarters. The larva can then enter the sheep’s body and cause a painful death. Industrial farmers have attempted to solve this problem with a variety of cheap, cruel methods, including tail-docking. Over 90% of the lambs in the U.S. have their tails cut off at an early age. Frequently tails are cut too short, and these lambs suffer rectal prolapse in which the tail muscles weaken and force the rectum to painfully protrude from the anus. (4)  Merino sheep suffer an even more extreme form of abuse.  Since they have more wrinkly skin (to produce more wool), they are more prone to fly strike and undergo a horrific practice called mulesing where not only the tail but a large piece of skin covering the buttocks is sliced off without any pain killers.  This leads to smooth scar tissue that won’t retain moisture and attract flies.  An alternative would be to clean the sheep’s rear end with a wet rag a few times a year, but it isn’t considered worth the labor cost.

Other forms of painful mutilation include disbudding or dehorning, where the sensitive horns are seared off, and castration by placing a tight ring around the male sheep’s testicles until they fall off.  Again, these practices are all done without any pain medication.

In addition to the sale of wool, the other main source of income from sheep production is the sale of lambs for meat. “Lamb” is the term for the meat of a sheep that is less than one year old. Meat from sheep older than one year is called mutton. Mutton has a stronger flavor, and lamb is generally preferred to mutton in the U.S. (5) And while Americans of northern European descent do not consume much lamb regularly, it is a dietary staple in many ethnic communities in the U.S. Of these, the primary consumers are Middle Easterners (largely Muslims), Greeks (Orthodox Christians), Jews, and Hispanics. Lamb is also the preferred meat for many Christian, Jewish, and Muslim holidays. (6) 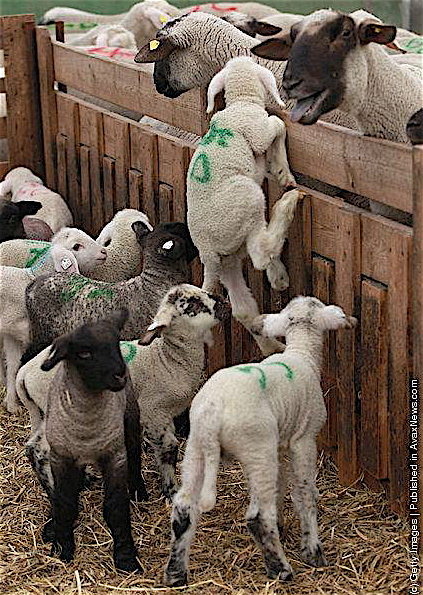 Lambs are slaughtered between the ages of 2 and 12 months. Two-month old lambs are sold as “hot house” lambs, and are favored as a delicacy by Europeans.  In 2011, nearly 2.2 million sheep and lambs were slaughtered for meat. (7)

When sheep arrive at commercial slaughtering facilities, they are unloaded, weighed, and placed in a restraining chute. Before being slaughtered, each animal is supposed to be rendered unconscious. The goal is to penetrate the brain but not sever the brain stem. If the brain stem is severed, then the heart would stop pumping blood and the animal would not bleed out as quickly or completely as desired. The tool most commonly used for this procedure is a captive bolt pistol. The pistol is placed firmly against the animal’s forehead and a long, pointed bolt is shot into the brain, causing the animal to spasm uncontrollably and then collapse. After being shackled by a hind leg and raised off the ground, the sheep is cut from the stomach to the throat and left to bleed. Many times, the animals regain consciousness due to improper stunning and have their throats slit, or are even skinned and dismembered, while fully awake. (8)

Some states do not permit on-farm slaughter by the customer. Unfortunately, the USDA’s on-farm slaughter exemption is open to interpretation. Some people will claim that by allowing a customer to slaughter a lamb on a farm, the farm is a “slaughter facility” and requires licensing. Others claim that there is no law that prohibits a person from slaughtering his own livestock.

On-farm slaughter plays a significant role in the lamb market. Many ethnic customers prefer to perform their own slaughter in accordance with their cultural and religious beliefs.  Other citizens prefer to “connect” with their food by killing animals. But careless or indifferent “backyard slaughter” and religious slaughter techniques and beliefs often compromise the welfare of lambs and other animals slaughtered in this manner. (9)

The two primary religions that practice ritual slaughter are Jews (Kosher) and Muslims (Halal). Though the Humane Slaughter Act requires that animals be rendered insensible prior to their slaughter, religious or ritual slaughter is exempted from the Humane Slaughter Act. Animals killed for halal or kosher, according to religious law, cannot be stunned or rendered unconscious before their throats are cut. Instead, the jugular veins, carotid arteries, esophagus, and trachea of the animal are severed with a deep cut while the animal is restrained and fully conscious–which means that many animals—like the cow shown in this video—fight and gasp for their last breath, struggling to stand while the blood drains from their necks. (10)  They suffer horribly.

If we are fortunate enough to be able to live without causing violence and harm to others, shouldn’t we do so…and do so with gratitude? (11) There are so many harm-free alternatives to wool and meat. From winter coats to decorative rugs, to delicious stews and curries, it is possible to enjoy traditional recipes and well-made products without the traditional cruelty.  Cotton, cotton flannel, polyester fleece, synthetic shearling, acrylic and hemp are all alternatives to wool that are cheaper and easier to care for. And please visit the Recipe Roundup on our Vegan Nutrition page, for links and ideas to delectable animal-friendly cooking.